Angert and Buckingham to Defend The Championship Titles

Exactly one month out from the race, Florian Angert (DEU) and Lucy Buckingham (GBR) have both confirmed they will face a tough, yet exciting, challenge on 22 May when they defend their titles at Challenge Family The Championship, hoping to repeat their success at the flagship event in Samorin.

The Championship will again take place in and around the x-bionic® sphere with top athletes competing for a 100k euro prize purse, double that of 2021. It’s a given the athletes will go all out to win this prestigious race and it is not a certainty that Buckingham will walk away with the victory. She will have strong competition from Ashleigh Gentle (AUS), Daniela Bleymehl (DEU) and Emma Pallant-Browne (GBR), among others. And in the coming weeks more top athletes will be added to that list.

Of the above women, Gentle is perhaps the favourite, particularly after her strong win at Clash Miami, just over a month ago. Shortly before that, Gentle announced that she was quitting World Triathlon racing and focusing on the middle distance. Someone who was also strong during Clash Miami was Emma Pallant-Browne, although she was caught by the heat during the run and was taken out of the race. She will therefore want to do everything in her power to take sporting revenge and appear at her best at the start of The Championship. Daniela Bleymehl is returning this season after having her daughter a few months ago and recently won her first race back in emphatic style, showing she is also in contention.

In the men’s field, last year’s champion, Florian Angert, returns to repeat the battle that is bound to unfold between him and his compatriot, Frederic Funk. Last year, the two were evenly matched for a long time, until Funk could no longer keep up with Angert’s running pace and eventually also had to let Magnus Ditlev pass him by. While Angert will now race to defend his title, Funk will have something to set right and surely hopes to step up to the highest rank of the podium.

While, as with the women, more top male athletes will be announced in the coming weeks, it is interesting to take a look at who could be a dangerous outsider for Angert and Funk: Youri Keulen. The Dutchman is just starting at the highest level of middle distance racing but earned fifth at Challenge Peguera-Mallorca at the end of last year and just last month came an impressive fourth at Clash Miami, showing he is absolutely capable of competing at the highest level.

The Championship will take place on Sunday 22 May with over 1,000 athletes competing at the Olympic training centre, x-bionic® sphere in Samorin, Slovakia. A full live stream will be broadcast at live.challenge-family.com. 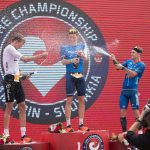 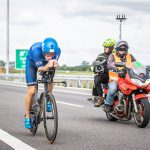 The Championship Confirms Free Livestream in Partnership with Triathlon TodayNews